New, crossplatform SCATT Expert software - has all the necessary functions for training and analyzing the results of the highest level shooters.

The software contains a most common targets for shooting at a distances up to 1000 meters.

On the screen is conveniently placed: the aiming trace on the background of the target and the most significant parameters of the shot.

For the convenience of perception and analysis, the aiming trace is colored in different colors:

Green (time interval from start of aimint to -1 second before the shot) - allows you to assess the direction and nature of the movement of the aiming point on the target.

Yellow (time interval from -1 to -0.2 second before the shot) - serves to visually highlight the part of the aiming trace used for the analysis of stability and the aiming character.

Blue (time interval from -0.2 second before the shot to the shot moment) - an interval equal to the average time of a human's reaction to an external stimulus. By the nature and length of this interval, you can judge how the shooter controls the position of the gun at the shot moment. 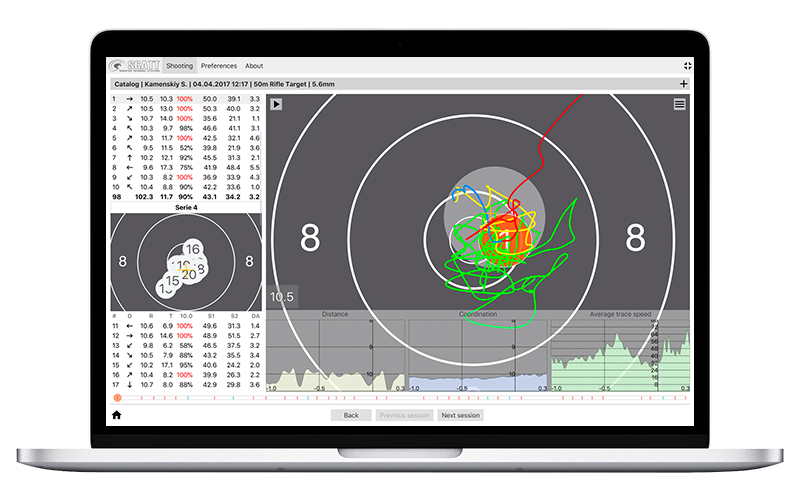 In addition to the result of the shot, you have the opportunity to see and analyze numerous parameters:

Speed of aiming trajectory – this graph represents the speed of the trajectory’s movement on the target, effectively measuring a shooter’s steadiness.It is a very useful graph for analysis of the steadiness and of shooting between heartbeats.

The software allows you to change the interface settings: colors, size and font style can be changed in accordance with the user's taste preferences and adapted to the size and resolution of the screen.

All practices are automatically recorded in the directory where shooting files are grouped by date and shooter's name.