New, cross platform SCATT Basic software - offers the most valuable training features and supports the most popular targets, including 10, 25, and 50 meter pistol and rifle targets.

On the screen are conveniently placed: the aiming trace and the most significant parameters of the shot.

For convenient perception and analysis, the recorded movement of the aiming point (trajectory) is divided in 3 different colors:

Green (the interval from entering the target up to -1 second before the shot) - allows the shooter to evaluate the direction and nature of the aiming point movement in the initial stage of settling on the center.

Yellow (the interval of 1 second before the shot) - visually distinguishes on the trajectory line the most significant part of the aiming process. Used to analyze the stability and the characteristics of the aiming in general. 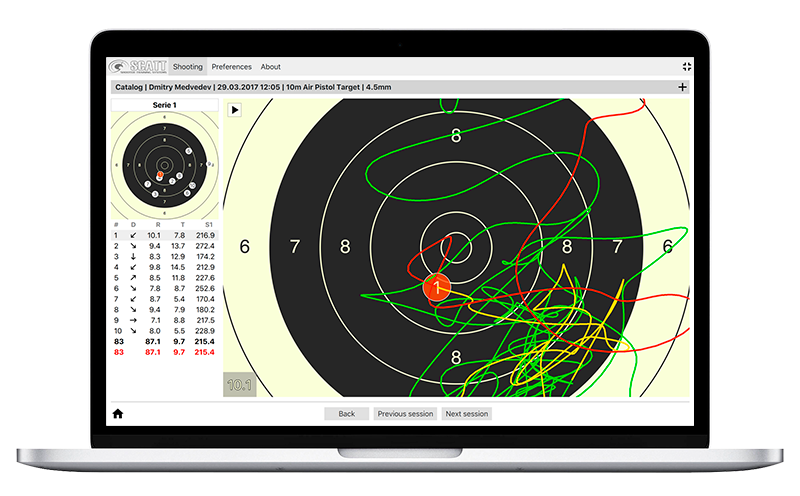 Aiming Time - sotware displays the time from start of sighting to the shot moment.

Aiming Trace speed - this parameter "S1" shows the length of the aiming trace for one second before the shot. Allows you to evaluate the shooter's stability.

The program can replay the aiming trace right after the shot is fired, as whilst aiming, the shooter is unable to watch the computer display.

The software allows you to change the interface settings: colors, size and font style can be changed in accordance with the user's taste preferences and adapted to the size and resolution of the screen.

SCATT Basic software is existing for the Windows, Mac OS and Linux.